Radio Live is a new on-stage radio show concept that blends the energies of live music and debate to create a dynamic space for young people to speak out about the issues that are most important to them.

The show was created by Aurélie Charon and Caroline Gillet, two French radio journalists from France Culture, one of France’s most popular radio stations, and has been performed more than 50 times on different stages around the world. In each country they visit, they offer a space for young people to share their stories.

After a successful show in Kigali, Rwanda, Aurélie and Caroline are coming to Johannesburg to perform at the Centre for the Less Good Idea, with the support of the French Institute of South Africa, before heading to Mauritius.

For the past six years, Aurélie and Caroline have been traveling the world to interview inspiring and politically engaged young people to bring out fresh perspectives on issues related to religion, minority rights, feminism, LGBTQ rights, and the effect of violence in conflict zones. They recorded the daily lives of this generation to create a series of radio portraits for Radio France, and have recorded shows in Algiers, Tehran, Moscow, Beirut, Tel Aviv, Gaza, Sarajevo, Istanbul, New Delhi, and many more.

Radio Live was born from all these different experiences and encounters, and from their desire to create a shared space for young people to cross paths and exchange their life stories. Two years ago, they started performing their radio show live, on stage, while inviting two or three participants from the country they visited, to share their own story with the audience.

In Johannesburg, Aurélie and Caroline have invited a previous participant from Bosnia, a young woman called Ines Tanovic Sijercic, to join them on stage to talk about her story during the war in Bosnia, where she was born.

Radio Live is more than a talk show or a theatre performance: it is an encounter of travel and shared experiences. Based on an actual radio show, the artists have added other dimensions to illustrate every story: live drawing, music, dance performances and video chats with the audience. As French Magazine Telerama reviewer Irène Verlaque said, “for almost two hours, we take part into a fascinating radio documentary on stage, illustrated live and on a big screen, punctuated by sound and video archives”.

The topics are always open and broad, from democracy to minorities’ rights and women’s rights. Guided by the two journalists, the young people invited on stage share their stories, desires, and anxieties. Everybody is fighting in their own way against community divisions and nationalism. They all have a common wish for change and for their voices to be heard. It’s a new generation talking into the microphone, reflecting on their individual lives and how they resonate together. They create an image of the present, in different places, connected, and of the future for the new generation. 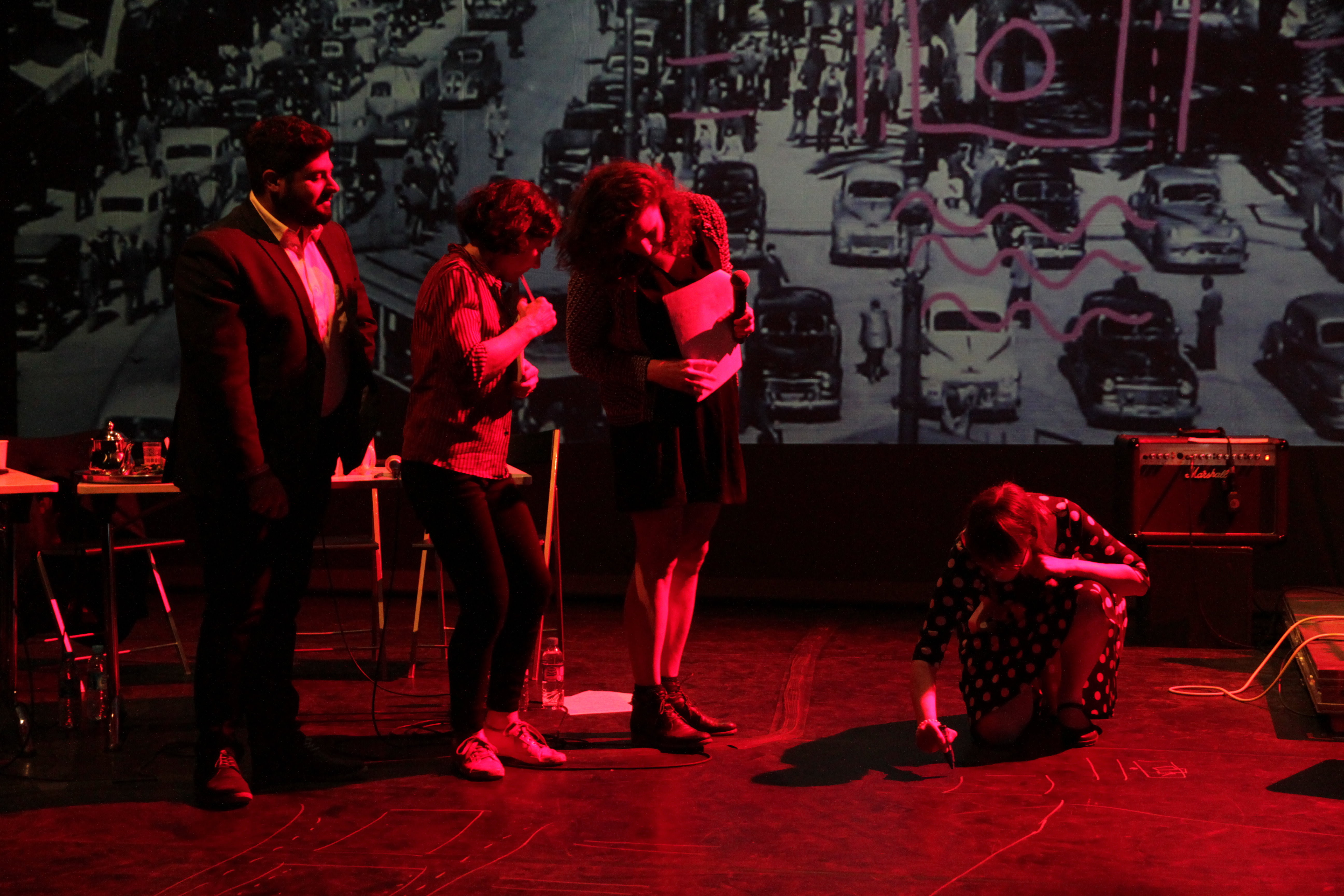 Aurelie Charon is the producer of a radio show called “Une vie d’artiste” broadcasted every Monday night at 11pm on French National Public radio France Culture. An hour of radio in which artists are invited for performances and experiences. For the past six years, she has been producing a documentary series about youth in the Mediterranean. The project was started with Caroline Gillet and after three years, she pursued it with questions about dreams in spaces with lack of democracy. The series was called “Underground Democracy” (2014, in Tehran, Gaza, Moscow and Alger, France Inter). She is currently preparing a film on Gaza. She has started a long-term project on French youth with “Une série française” (2015 France Inter), “Jeunesse 2016” (France Culture) and the film “La Bande des Français” for France 3 (2017). Since 2012 with Radio Live, she has been shining a light on this generation on stage with Caroline Gillet.

Caroline Gillet is a documentary producer who works on various innovative formats including radio, TV, transmedia and live performances. From 2011 to 2013, she produced a radio project about youth in the Mediterranean with Aurélie Charon. It took them amongst other cities to Algiers. “Alger, nouvelle generation” later became a film and a web documentary. Caroline then produced short stories about European youth for another two years in radio and video form. The project was published by Actes Sud: “I like Europe, paroles d’une génération de Porto à Riga”. In 2014 and 2015, she produced a live radio show, “Tea Time Club ” in which she invited young people from around the world to dialog together through Skype. The radio show was adapted on screen in 2016. For the past three years she has been creating short radio portraits for France Inter: “À ton âge” and “Babelophone” and has taken her work with youth on stage for Radio Live, a project co-produced with Aurélie Charon.

Gala Vanson is a French illustrator whose practice includes publishing, pedagogy and performance. She has collaborated as an illustrator with several French museums, cultural institutions, publishers and newspapers. She is currently working on two multimedia projects as well as a graphic novel. Her work explores the links between the intimate and the collective through the search for common language.