Getting to and from work is expensive and time-consuming and gridlock is problem in most of South Africa’s big cities.

This is the problem Gugulethu Mhlanga and Simphiwe Kuse set out to solve with a clever app that will transform the lives of thousands of commuters: a ride sharing App called City One, available on the App Store.

City One is a service designed to offer a viable alternative to the daily commute in a self-driven vehicle. It operates much like any other call-a-cab system except you share your ride with others. You tell City One what time you expect to leave, from where, and your destination. City One then links you to others in your vicinity who’re travelling at the same time in the same general direction, and bingo; you’re sharing the space and the fare. And make no mistake; the savings are big. Not to mention being better for the environment and the elimination of parking hassles.

Suppose you don’t connect with your fellow passengers or your driver? No problem City One will provide a range of alternative rides.

Your City One driver has been subjected to a number of stringent tests – for driving ability, character and trustworthiness.  What’s more there are no charges involved in booking. You pay when you ride and may cancel, without charge, in advance, for any trips you can’t make.

This development is the unfolding vision of (Zimbabwean) Mhlanga and (South African) Kuse. They share a deep-seated belief that they can help decrease rush hour traffic congestion by building a commuting culture, while helping people reduce their travel costs. Average fares are significantly lower than the cost of driving your own vehicle, yet high enough the give the driver a fair income on top of the costs of fuel, maintenance and taxes.  It’s a win, win, win.

Mhlanga and Kuse met when they were sharing a room at the University of Cape Town and are passionate about improving the quality of African lives through technology. They believe young people, from any background, can learn how to code and if many young people are taught the skill of coding, they can go on to establish their own companies that might solve many of Africa’s biggest struggles – from health, crime, finance, and transport to food security and education.

City One was featured as App of the Day and App of the Week on the App Store and can be used in Joburg and Cape Town initially.  Download the passenger app here https://apple.co/2BviPoS.  If you’d like to become a driver register herehttp://bit.ly/2P2eQUd

Background on the Developers:
Founder’s Gugulethu Mhlanga and Simphiwe Kuse are passionate about improving the quality of African lives through technology. They believe young people, from any background, can learn how to code and solve some of their own problems. Believing that, if many young people are taught the skill of coding, they could go on to establish their own companies that might solve many of Africa’s biggest struggles – from health, crime, finance, and transport to food security and education.

Thirty-year-old Gugulethu Mhlanga, who comes from Zimbabwe, moved to Cape Town in 2010 and studied two years of mechanical engineering at UCT before he had to drop out of his studies due to lack of funds. He started a journey learning how to build iOS apps with no knowledge of coding and was hooked by what apps could do. He decided to defer his studies indefinitely. While holding a series of fulltime jobs, he learnt to code at night and weekends.

Says Mhlanga “I struggled to understand coding for about two years but with persistence, I eventually got it. I spent nights googling how to build all sorts of apps – a calculator, a budgeting app and a few games among them. The most important thing I took away from the process, was that programming is learnt much faster through building projects than trying to grasp the syntax.”

By the third year of coding, Mhlanga was working as a junior interface designer for small start-ups and had a fitness app published to the App Store.

And then the idea for his breakout app City One was born.

“My commute to work was with a housemate who owned a car while we both lived in Athlone, Cape Town. Every morning I would watch as people drove alone in their cars while struggling with traffic congestion, rising fuel prices and parking costs. It made sense that sharing vehicles would be an efficient way to commute but motivating people to do so and putting strangers in touch with each other would be very difficult,” he explains. Hence, he called on his former roommate, Simphiwe Kuse to be partners in building City One.

Thirty-year-old Kuse grew up in Engcobo, a small rural town in the Eastern Cape. It was while studying philosophy, public policy and politics at the University of Cape Town that he met Mhlanga. After graduation, he worked for the South African Government in various departments including the Eastern Cape Department of Transport, The Presidency (national) and Department of Justice and Constitutional Development. 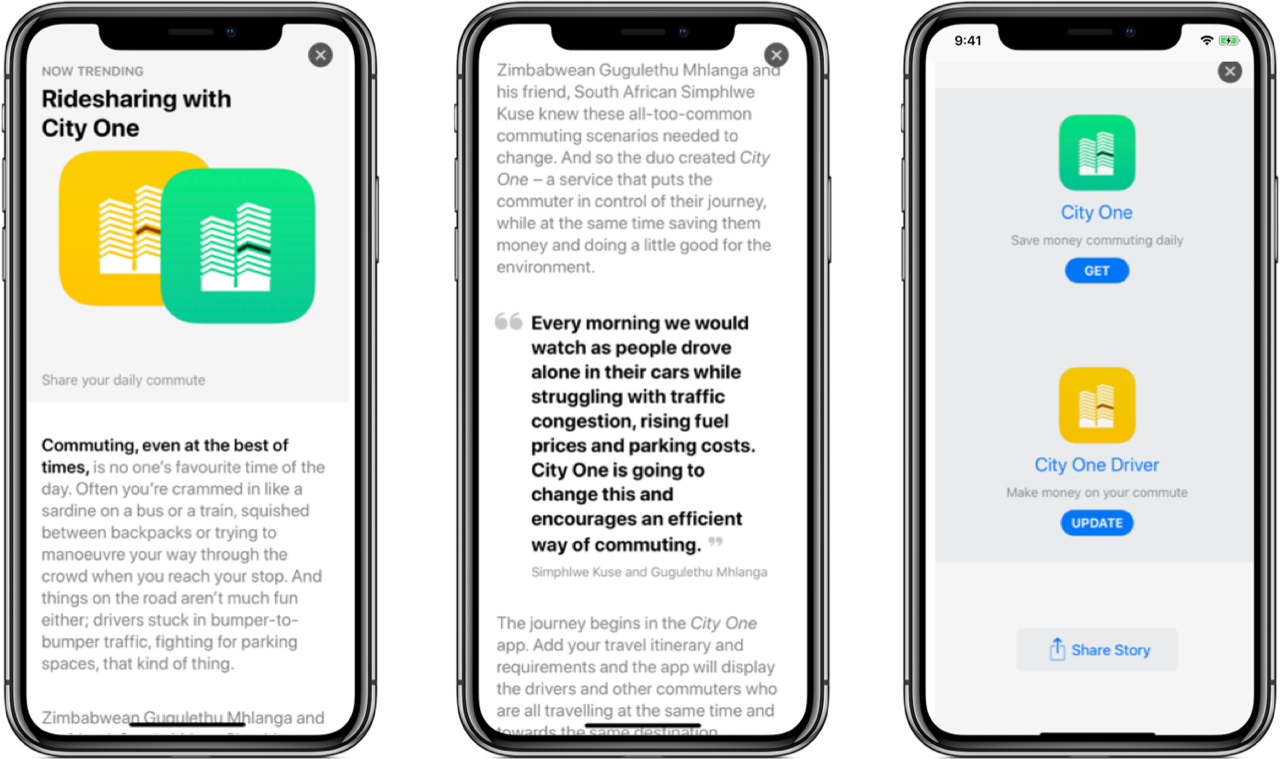